Anthony Lent has been handcrafting fine jewelry for women and men for almost fifty years. Tony began his foray into the jewelry world while studying sculpture at the Philadelphia College of Art (now University of the Arts). While there, he discovered that many of his favorite artists, such Celini and Dürer, were also goldsmiths. He also encountered the works of various renowned jewelers, including René Lalique, René Boivin, and Mario Buccellati, amongst others.

In 1971, Tony moved to Germany to pursue his goldsmithing education at the Fachhochschule in Schwäbisch-Gmünd. In Germany, he immersed himself in the traditions and technologies of European jewelry design, acquiring the skills and knowledge that would become the foundation of his own work and teaching.

On returning to the United States a few years later, he began his career as a jeweler in New York City, working for some of the industry’s most prestigious and celebrated fine jewelry houses. During this time, he developed a unique line of bespoke jewelry which was exhibited at galleries and represented by private dealers throughout the world. He also served during this time as a professor at the Fashion Institute of Technology (FIT), where he was chairman of the Jewelry Design department from 1990–2001.

Tony is joined by his sons, David and Max, who founded the Anthony Lent brand in 2013. Together, they are working to preserve their father’s legacy. Anthony Lent takes “fine jewelry” literally. They strive to meet the highest standards of quality possible and treat attention to even the “finest” of details as the number one priority in everything they do. All of their jewelry is designed and manufactured with pride in the USA. 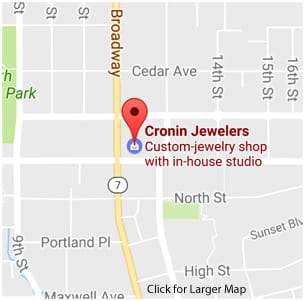 Fill Out this form